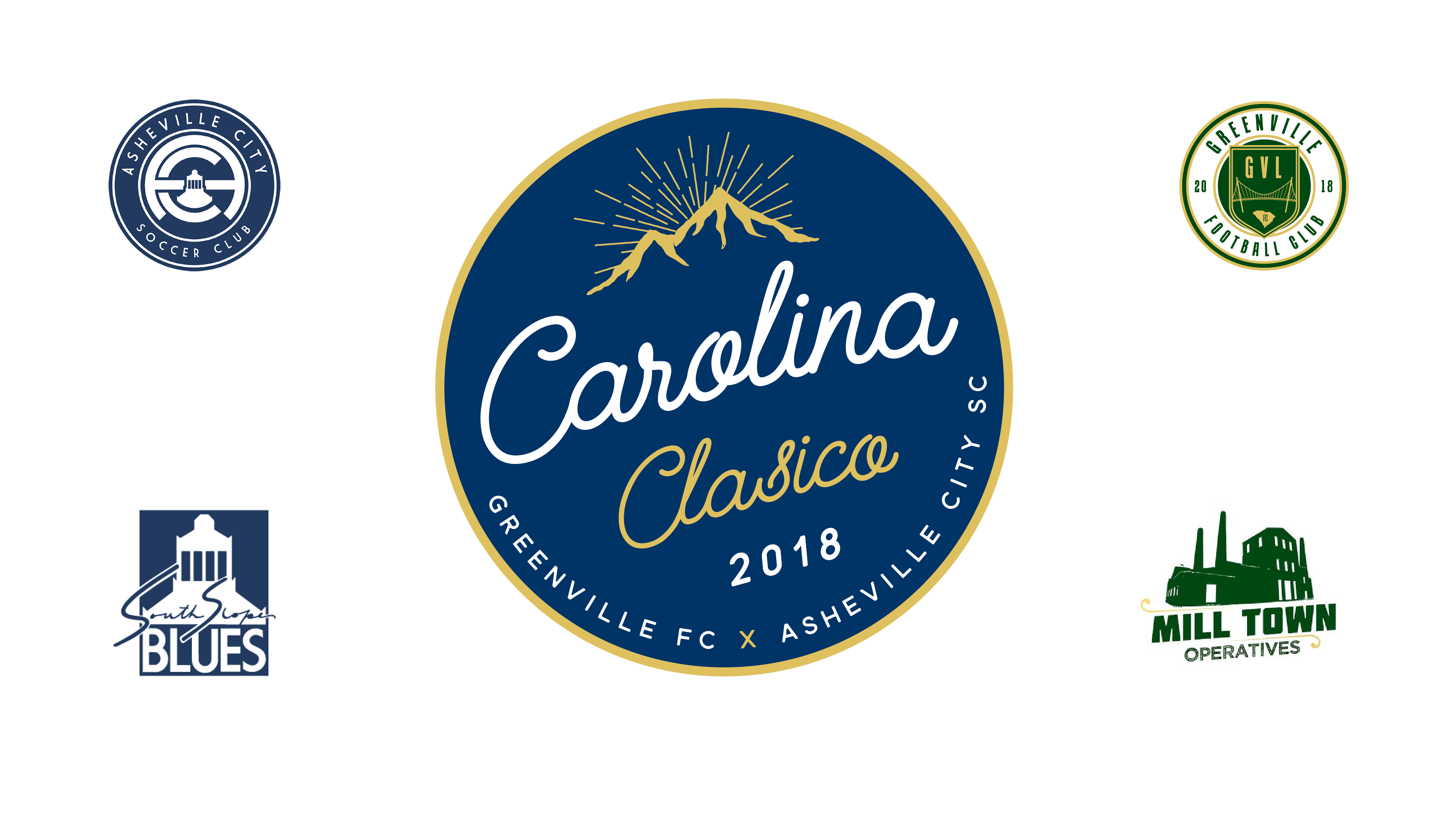 GREENVILLE FC AND ASHEVILLE CITY SC, ALONGSIDE THE  MILL TOWN OPERATIVES AND THE SOUTH SLOPE BLUES, ANNOUNCE THE INAUGURAL CAROLINA CLASICO… THE WORLD’S FIRST RIVALRY COMPETITION DECIDED IN PART BY THE SUPPORTERS THEMSELVES.

​Divided by state lines but only 60 miles, Asheville City SC and Greenville FC will face off for the first time in a highly anticipated matchup on Saturday, June 23rd at Memorial Stadium in downtown Asheville. Sporting some of the largest and most passionate fan bases in the country, the two clubs will put their playoff aspirations on the line in the first of two legs, the second of which will be played on July 4th at Eugene Stone Stadium at Furman University.

Like most rivalry trophies this one will be decided on aggregate goals across the two legs, however, there is one significant twist: The South Slope Blues and the Mill Town Operatives, the supporters’ groups for each club, will be directly involved in who takes home the trophy and the bragging rights. Before each match the supporters will compete in a series of events, such as soccer pool and cornhole, with the winner earning valuable points (worth .5 goal each) toward the aggregate score of the series.

“Our supporters are the heartbeat of Asheville City” said Ryan Kelley, ACSC President. “In discussing a series with our counterparts in Greenville, whom we feel align closely with the mission and intent of ACSC, we quickly embraced the idea of supporter participation in the competition. The South Slope Blues are behind us regardless of the circumstances, and we can’t wait to cheer them on to victory just as they do for us game in and game out.”

“In the early stages of planning Greenville Football Club, I always knew this would be the match I looked forward to most” said Marco Carrizales, Greenville FC President. “I think for us, as well as our supporters, it’s a match that means much more than a score line. Separated only by 60 miles, this is an opportunity to continue to grow the sport we all love and show how clubs can really have an impact in our communities, and I think that will shine through in the Carolina Clasico.”

​Greg Cooper, leader of the South Slope Blues, offered his thoughts on the new series: “Personally I’m excited about what this rivalry will mean to not only our clubs, but for our fans. Because of our proximity, this rivalry will be a whole different ballgame for home games. No more small away sections. No more golf clapping fans. We have two passionate sides with similar views chasing after the same thing. The Clasico. COYB!”

“The Carolina Clasico is a soccer dream come true for me! Growing up watching Derby Days like Manchester United versus Manchester City, Liverpool versus Everton, always seemed so cool” said Blake Holloman, leader of the Mill Town Operatives. “The Carolina Clasico allows me to be part of something like that in my own city and a city not so far away is just incredible. I’m most excited about going chant for chant with the South Slope Blues knowing how much this rivalry means to us both. On top of the fact that our boys are clicking at the right time and are prime for a late season push! I know this is something Greenville and Asheville will both enjoy for years to come! Greenville Til I Die!!”

Stay tuned to @GVLFC and @AshevilleCitySC social media channels for more information about the Carolina Clasico.