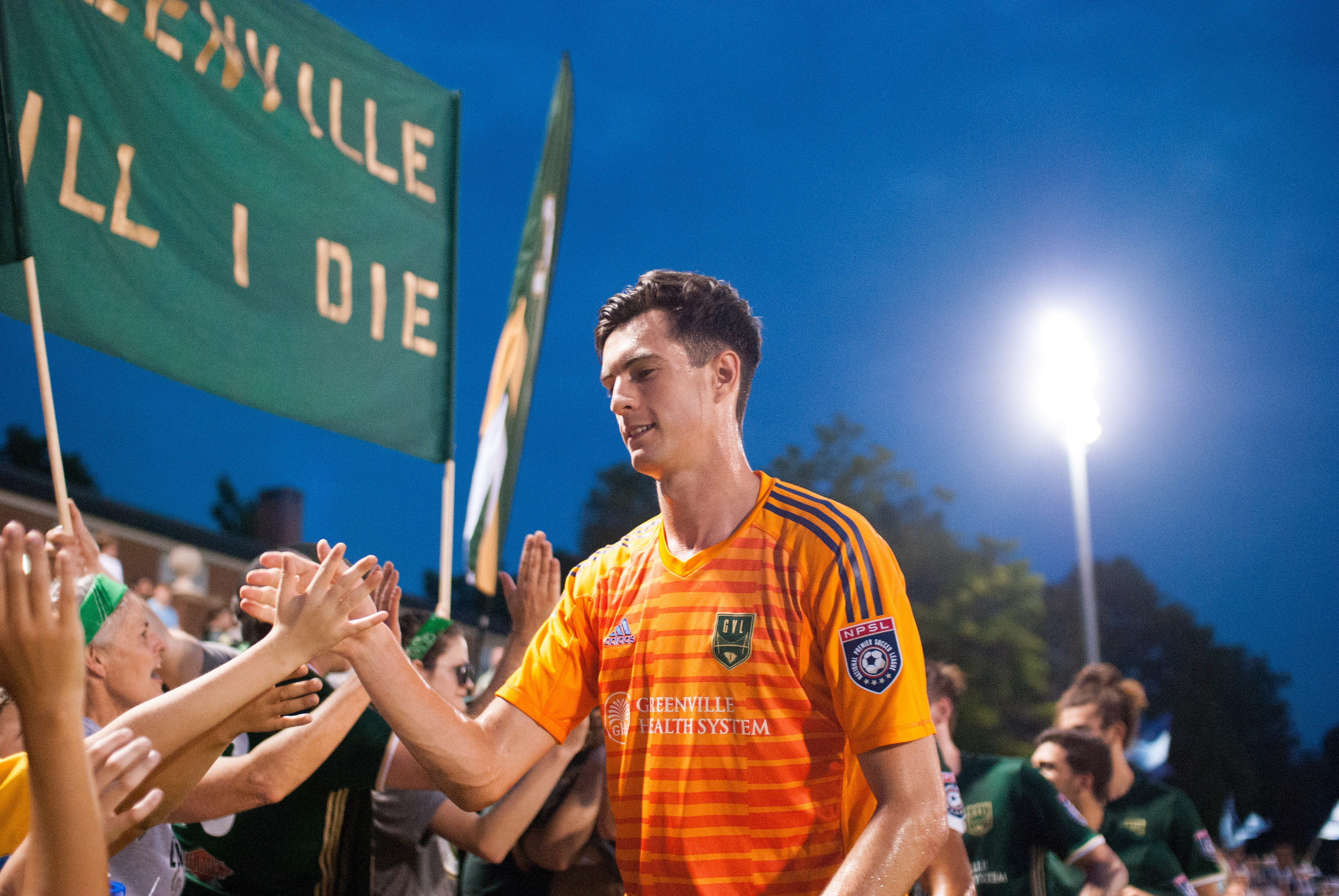 Greenville, SC – Paul Tyson has made an impact in Greenville FC’s inaugural season. Every Saturday it seems Paul finds ways to pull Greenville out of the depths. Whether it’s a penalty save against Atlanta or a diving save against Chattanooga it seems like a match doesn’t go by where Paul doesn’t do something miraculous, and the fans have taken notice. As you can hear them cheer on an matchday in Furman’s Eugene Stone Stadium, “He’s big. He’s tall. He’s Paul The Wall.”

Paul grew up in Liverpool. A large port town in the northwest of England that many call Merseyside. Home to giants of global soccer: the reds of Liverpool F.C. and the blues of Everton F.C. Most houses in Liverpool are divided between the two clubs, and Paul’s home was no different. Paul grew up in a household where red was the color of the day. Paul was raised on a passion for soccer idolizing Liverpool legends like Steven Gerrard.

However, Paul wasn’t always a goalkeeper. It wasn’t until he turned 16 one of his high school coaches saw how tall the 6’7 forward was and made him play in goal. He played two years in the academy at local pro team Oldham Athletic. A club (nicknamed the owls) that usually moves around between the third to fifth tier of English soccer. After failing to make the team after three years Paul went to now current Premier League darlings Huddersfield Town where he met a goalkeeper coach who linked him up with the Nike Academy. There he got selected for the world showcase, and soon thereafter moved to America to by play college ball in Pasadena, Texas, a suburb of Houston, at Saint Jacinto Junior College. Almost like moving to a completely different universe.

Paul moved from one southern city to another as in 2016 he transferred to Georgia State University located in Atlanta, Georgia. However, in 2017 Paul found little to no game time in a Georgia State squad that finished second in a competitive Sun Belt Conference. Paul, not content with just playing college soccer, looked for minutes in a higher level league and was able to link up with Greenville F.C. where he has found himself to be a fan favorite blocking shot after shot. Paul models his game somewhat after Chelsea player and Belgian national, Thibaut Courtois. “I really like Courtois,” says Paul, “just cause he’s tall and long like me.”

With his rapid success many fans have nicknamed him Paul “The Wall” Tyson. “It’s fantastic,” Paul says on his new moniker, “Never expected coming to an NPSL club to see good support and stuff like that from the fans. It’s unbelievable.” Fans have even gone so far as to unleash a tifo of Paul in front of a brick wall.

While in Greenville, Paul has taken to the city. “It’s really cool,” Paul states, “there are a lot of nice places to go and the people are amazing. I’ve become fond of it.” Paul lives in a local apartment with some of his teammates. They go to the gym, spend time at the pool, attend practice, explore downtown, etc. Along with soccer, Paul is currently studying marketing and taking an IT class this summer.  “I’ve just been blown away by the support,” say Paul in his Mersey accent, “I can’t thank them enough.”